Sprawled out on a smooth gravel trail, I assessed the damage of a split second misstep with dread. Four weeks prior to my first 100 miler, I found myself in the ER, trying to stop the blood gushing from a hole in my knee that exposed the patellar tendon. Six months of miles and elevation, of obsessing over carefully calculated numbers in a spreadsheet, were lost in tears of disbelief that the start line would eventually elude me.

Fast forward one year and the only spreadsheet that mattered was the Vermont 100 waitlist, where I sat comfortably at 65th. It felt like a nail in the coffin of my 100 miler dreams. Maybe this race just wasn’t meant to be. But then, in a twist of ultra fate, my name crept onto the starting list in early June. Rather than limping with stitches and wasted fitness in the weeks prior to the race, this year I was left with mere weeks to train. The adrenaline rush launched me into a steep and beautiful ramp up. There was barely enough time to think, to plan. No more spreadsheets, no weekly mileage. Every day became a passionate pursuit towards this crazy goal, topping off a year’s worth of dreaming and aimless adventuring to carry me to the start line.

Mid-July in Vermont came swiftly and so did the heat advisory. Race day threatened 97 degrees with an even higher heat index. The day prior, a group of us gathered at the finish line to set up. Its red neon letters stood out like a beacon against the neverending greens of the surrounding woods, sending chills down my arms on a humid afternoon. The unknown was real. When will the wheels fall off? How can I possibly drink enough water? Will I even reach the finish line? As we slid a tent out of the truck bed, each of us dripping in sweat from the small movement, the ultra gods opportunistically sang an old tune from the car radio, “I’m losing my mind…” Yes, yes I am.

"Victory comes in many forms." 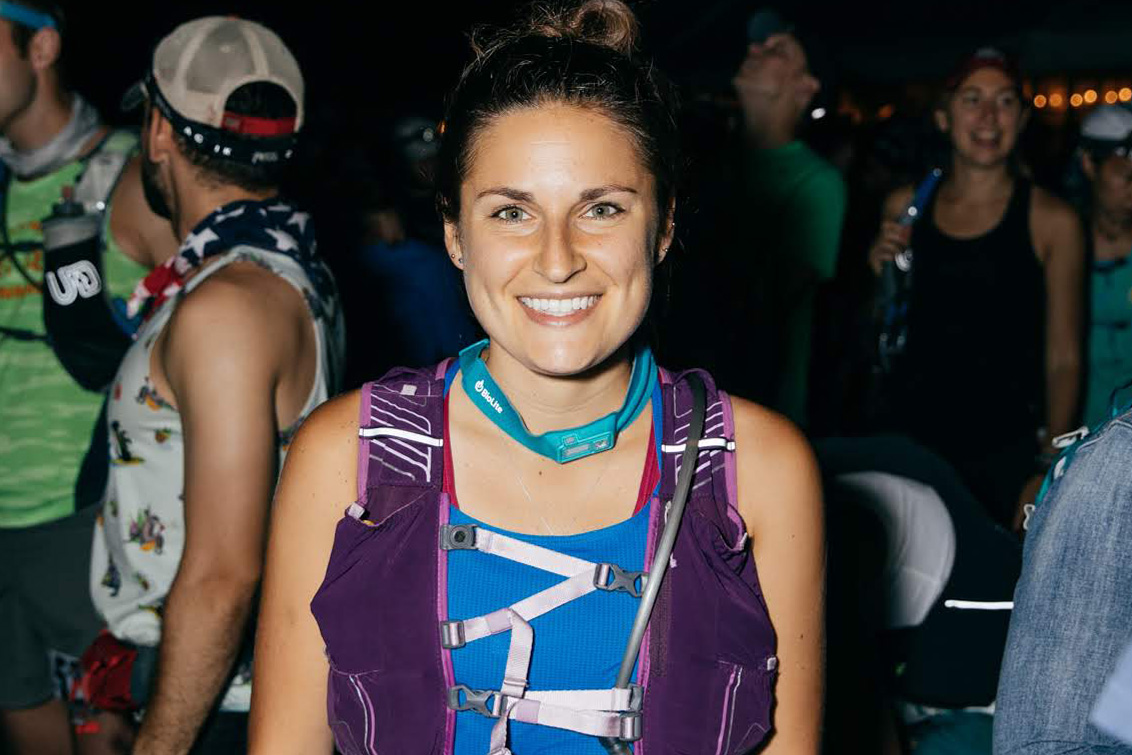 4am arrived and off we went into the dark of the morning. Nervous chatter between strangers sliced through thick air and carbo-loaded footsteps. At mile one, a steady stream of headlamps turned sharply to ascend the first hill of the day. Nearing the corner, a calm voice next to me disclosed, “They’re all going the wrong way. The course goes straight.” The voice came from Amy Rusiecki, the race director, who began her morning tethered to a visually impaired runner, guiding him, and by chance, me, onto the correct course. For a brief moment, a blind runner and I led the Vermont 100. Victory comes in many forms.

For the next two hours, sweaty, speedy and svelte men cruised by me on the gravel back roads and trails. I tried to turn my brain off to shut out self doubt and worry of the unknown. This is your longest run ever. Take it easy. It’s 100 miles in almost 100 degrees. “Don’t be a hero, be a finisher,” as Amy would say. I backed off and lightened my mood as a pink hue warmed the dusty gravel and verdant woods. This is beautiful and perfect and the epitome of Vermont...but it’s really only sunrise?

Nervous and chatty crews stationed themselves in eight locations throughout the clover-shaped course. I first saw my crew at mile 21, arriving completely saturated and dripping in sweat, with near tears of joy. Mom, Dad and my boyfriend Robert excitedly welcomed me to their picnic of salt pills, sunscreen, sugary snacks, hugs, and kisses. My parents have attended nearly every one of my races since 6th grade and wouldn’t have missed this for the world, and Robert’s devout confidence in me meant I would trade the world to have him at this race. 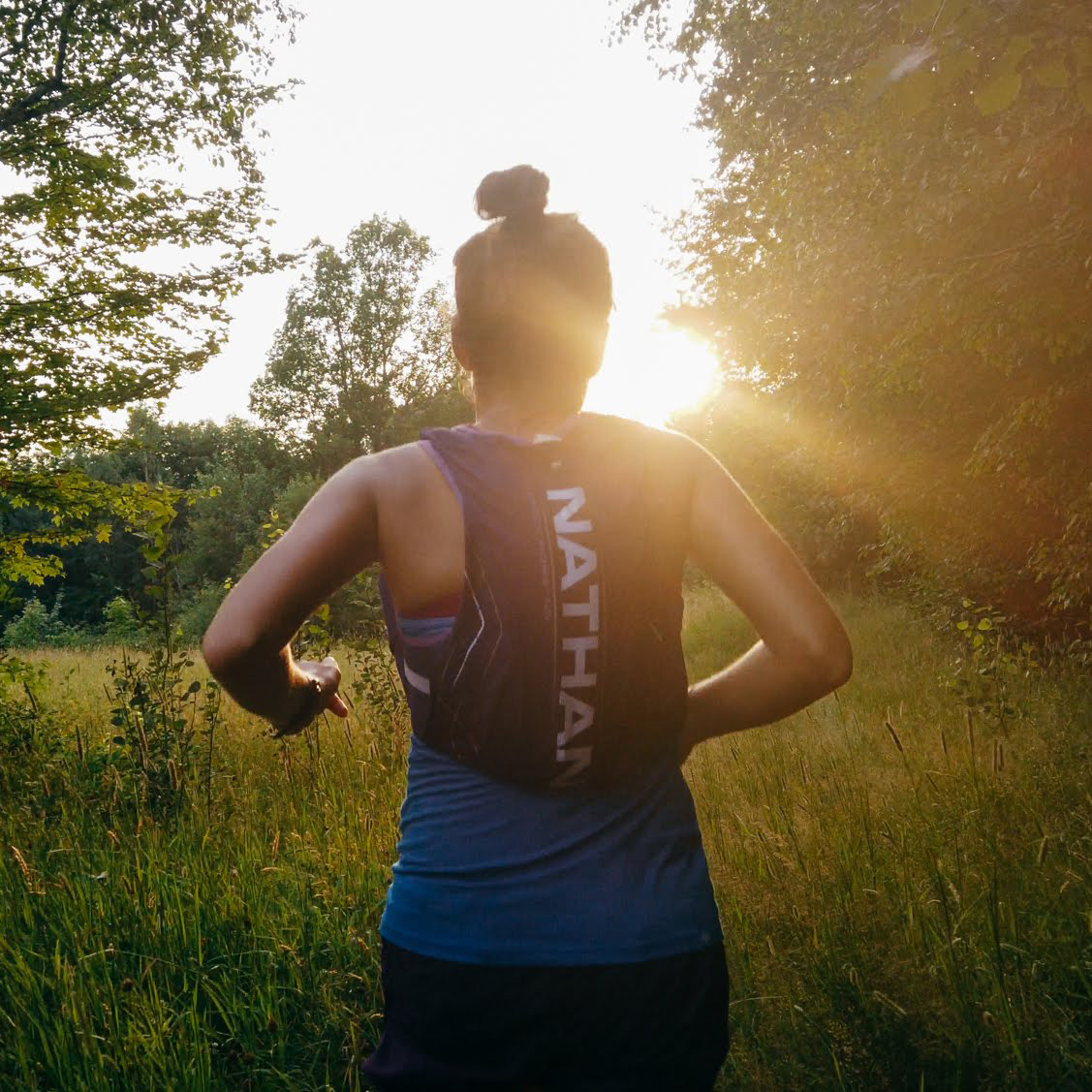 "Love comes in many forms!"

My race strategy was simple. Eat sugar, drink water, keep it salty and slow down. Wanting to spend as much time with my family as possible, I only stopped at the crewed aid stations. At mile 30 they urged me to sit down as the heat and humidity rose. Mom slathered sunscreen on my ears and Dad shaded me with an umbrella as Robert assessed the calorie count in each pocket of my Nathan hydration vest. Love comes in many forms!

For the next ten miles I thought the race was over. I discovered my hip flexors for the second time in my life and could barely lift my legs over the rocks and roots of the trail. Why on earth would my body choose this run of all runs to stop working? The race had thinned at this point and I found myself alone, battling pain, fear and negative thoughts. But, as pre-race advice so ominously warned, a 100 mile race is a year’s worth of running in one day. And that, my friends, means that injuries pass.

By mile 48, hip flexor worries were long gone and a rising core temperature took center stage. Volunteers vigorously shook cowbells at the Camp Ten Bear aid station, filling the air with noise and droplets of sweat in the 95 degree heat. Melting popsicles, ice water sponge baths, and spray bottle rinses brought joy in ways I never expected. Leaving the aid station I warned my crew to ready the ibuprofen, knowing the race was only beginning, and smiled, reveling in my last solo miles before I picked up a pacer. 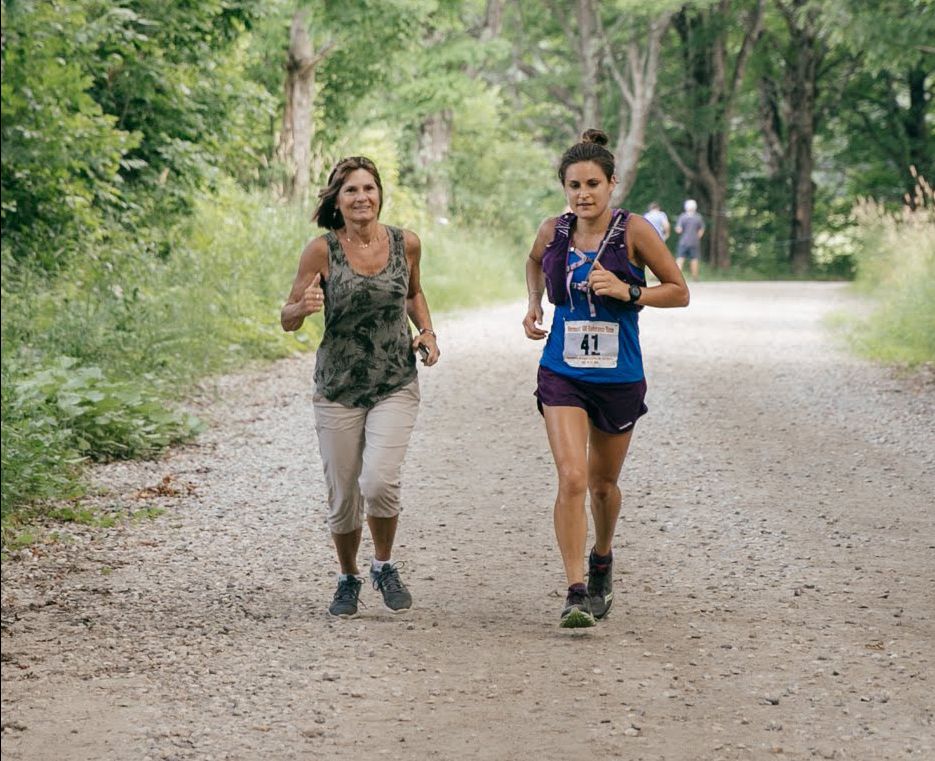 “You are a queen!” offered a kind woman during the high of mile 70, as my legs weightlessly carried me up a hill. Less than one mile later, after Robert switched from crew to pacer duties, I sat on a rock with him, crying and nauseous. Such is life. Both sweet and salty foods became repulsive and I shamefully chucked a hummus sandwich into the woods. My body is practically made of hummus at this stage of my life, so to waste such perfect calories meant I’d hit rock bottom. The overwhelming humidity seemed to fill me up until there was no room for those desperately needed calories. Robert lovingly and sternly persuaded me to force down one Gu, as all good pacers do, and, like a child eating broccoli, I grimaced and gagged until those 100 calories of birthday cake flavored goodness brought me out of a deep bonk and back onto a high.

Robert handed me off to my second pacer, Lydia, at mile 76. The sun had set and the temperature plateaued at ‘hot as hell.’ I warned her this would be a slog through the night as I shivered uncontrollably, clutching a Coke as my life source. My needs became few. Ibuprofen in, Biofreeze on, white potatoes packed. And off we went for the last marathon of the day.

"Community comes in many forms"

Although unable to verbalize my needs, Lydia fulfilled each and every one of them, guiding me effortlessly through the late hours of the race and keeping me out of the ambulances carrying runner after runner. Through mile 88, life was easy. Eat potatoes, run to the next glowstick, hike the crest of the hill, rocket down, repeat. The end became near and my focus narrowed on the light of my headlamp on Lydia’s feet. A man approached me at the last aid station, mile 96.5. “Are you Cara? Liba says ‘keep going.’” A simple message from a running club friend, passed along through a stranger, filled me with gratitude. Showing up at 1am to support strangers and friends alike in achieving their goals, however crazy, instills that feeling of belonging we all crave. Community comes in many forms. 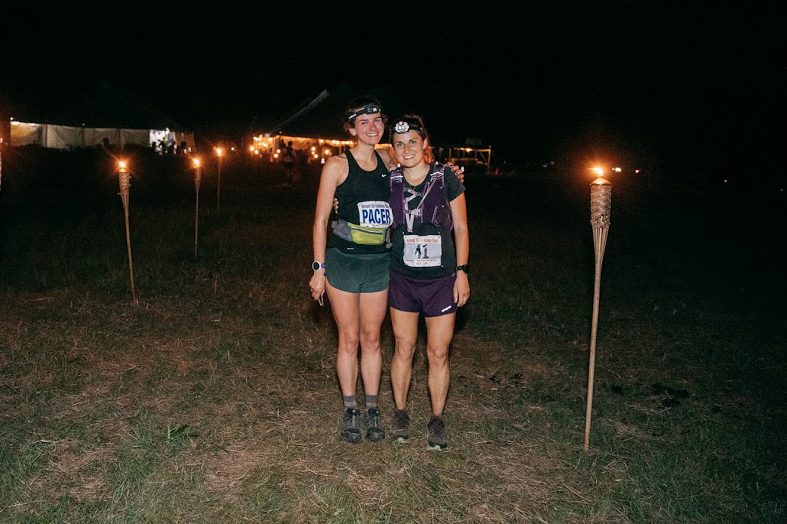 Heading into the night for our last romp, Robert informed us that the 4th place woman was 7 minutes ahead. I turned and laughed, as if I had any chance of catching her. The finish line drew me in, filling the adrenaline tank. I was actually going to finish this thing. And in the top 5! I began to write the story before the story was over. With 1.5 miles to go, two headlamps bobbed ahead at the top of a hill. “I think that’s her,” Lydia mused. “Let’s get her.” As we power hiked past the walkers, two lights turned slowly not to meet our eyes, but to directly illuminate our bibs. Four eyes widened as the 4th place woman and her pacer realized we were running the 100 miler and not the 100k. Go time. Lydia and I made the final turn into the woods and picked up the pace. A fever of excitement took over, as this 100 mile journey became a 1 mile race to the red neon I dreamt of for a year. We spent 9 exhilarating minutes ‘whooping’ and ‘yipping’ at how much fun this was! We both couldn’t believe the night we were having, how goddamn lucky we were to get to do this. The final mile of the VT100 was my fastest of all 100. I put 8 minutes on the next woman, though the place didn’t really matter at all. Those sweaty and heartfelt hugs from Lydia, Robert, Mom and Dad will always carry more weight than a belt buckle on the podium.

The finishers tent looked like a warzone, with rows of cots propping up dirty and wrecked champions. Of all the runners who started the Vermont 100, only 48% of them reached that sign in the woods. I sat slumped and shivering, sipping life back into me in the form of ramen. From faraway cots, the next place woman and I shared a moment of exhausted stares, with 22 hours worth of effort strewn about the space between us. How do you wrap your head around a year’s worth of running in one day? A year’s worth of highs and bonks, gratitude and tears. 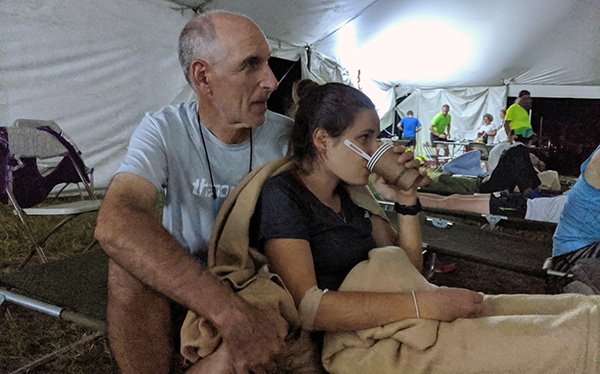 Now that the chafing has healed and scarred, I can’t help but wonder what else can be discovered in chasing a goal that’s bigger than myself. In taking a trail so rocky and rooty it brings me to the ground, one so windy it hides the peak from view, or one with no certain end.

These trails come in many forms; where will this one lead next? 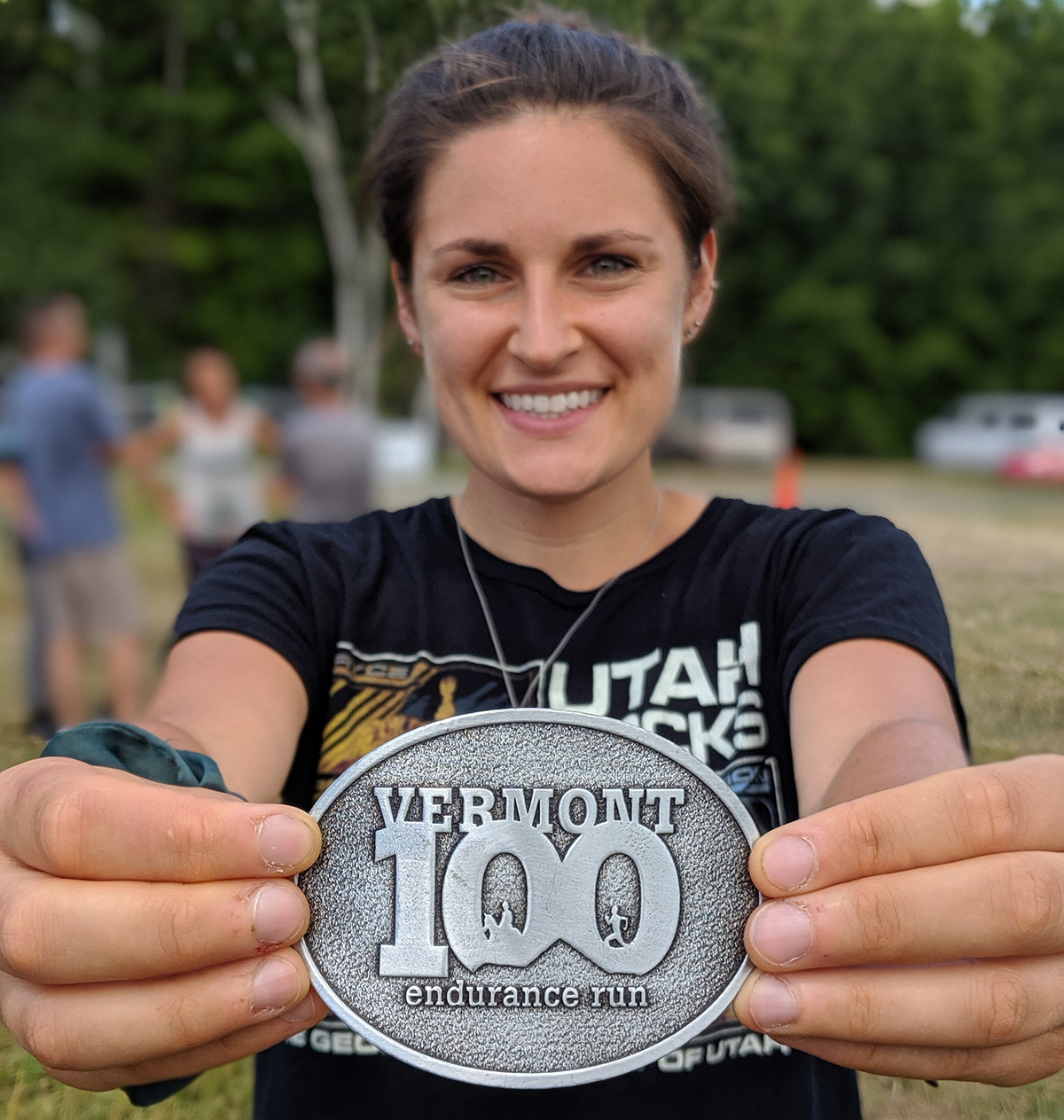 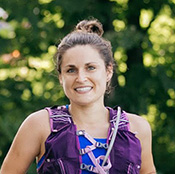 Cara has always chased her running goals fiercely. She’s paved the way for a lot of us, proving that we can indeed go faster, higher, farther. Those of us lucky enough to follow Cara’s running story know that her power doesn’t come from her spreadsheets (which she’s kept since 6th grade), it comes from her grit, unwavering love of running, and big brass cojones.